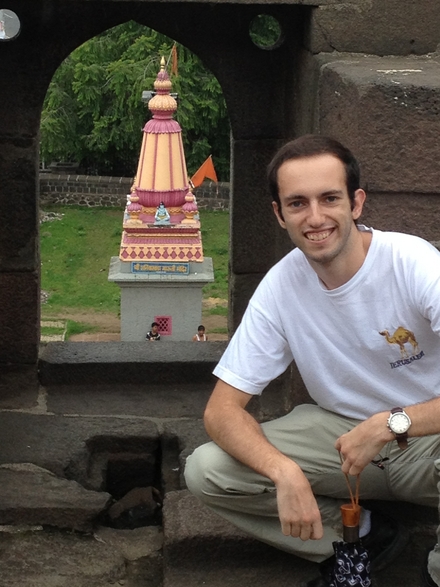 Last April a second student of the department,  Alex Polyak --SAST major-- was successful in securing a Fulbright Scholarship to support his academic research.  Alex is interested in the development of the Indian middle class circa 1890-1940, and in particular, the merchant families in Uttar Pradesh --previously the United Provinces of Agra and Oudh.  One line of enquiry for his research is around the development of the contemporary middle class in shaping Indian socio-economic life and politics -- and the importance of understanding the historical formation of this middle class.
Next school year, Alex will be locating to London and pursing a Masters degree at the London School of Economics. Here he will work with Tirthankar Roy, the economic historian of India.
Alex has been in India since the summer, and has been immersed in studying, researching and generally settling into his new environs. He sent some news:
"Delhi remains as ever a city of contrasts, but lately, as I begin to delve into my research at the National Archives, the contrast of old and new has become very noticeable. As I ride on the metro, I can see the clogged highways of Delhi, rusty bicycles with wooden carts being pulled behind alongside Audis and BMWs. Every now and then, you even see a horse-drawn carriage decked out for a wedding procession. It makes for a remarkable set of contrasts and reinforces a very clear image of what it means to be in a country that straddles developing and developed.
I just finished my language study award, three months of intensive Hindi. The funny thing about it is that you only notice your progress peripherally, sometimes after the fact, because it's never enough. Whereas a few months ago I wouldn't follow people's conversations on the street or metro, now I find myself irritated when there's a word that I overhear that I don't know. There are moments when you talk to a stranger in a doctor's waiting room for half an hour and only later do you realize you communicated in Hindi. And it's always a battle to remind yourself to concentrate on the positive examples rather than get hamstrung on the times when someone didn't understand your accent or you couldn't quite pronounce a word correctly. Language study first and foremost is confidence, especially when it's immersive.
As for the research, I'm very excited. The National Archives are located right by the government ministries. From Central Secretariat Metro Station it's a brisk walk along the Rajpath towards India Gate. You can see the smog at its worst, but I also think you get to see Delhi at its best, or certainly its most regal. The Archives themselves are a glorious mix of history and academic passion coupled with bureaucratic frustration. But then again, one can only expect as much."
Stay tuned for more news...
Tweet